We’re bursting with excitement to finally share Ben and Shay’s sexy, romantic adventure with you.

Be sure to read to the end for details of Lawbreaker Release Celebration Giveaways!

Annnd our latest book comes with an advisory label…

Reader Warning: You’ll need to buckle up and load up on snacks and energy drinks, because this baby clocked in at 112,000 words. But the heartwarming story is filled with adventure, dry humor, quick-witted banter, a touch of mystery, and a hard-earned happily ever after. 🙂

Raised on the streets, Shay Morgan yearns for a real family, where love is unconditionally offered—even when trust doesn’t come easy. Before that day arrives, she trespasses and steals in order to provide for the few people who’ve gone out of their way to protect her.

Born to privilege, Ben Bishop loathes his family for the despicable things they’ve done, and not done. He vows to be different, play by the rules, do the right thing. Building a thriving nightclub with those who share his values dominates his world.

One explosive night at his bar, Loading Zone, changes everything. For both of them. Forever.

A dance of opponents commences as they thwart with suspicion, start to trust, then sidestep to protect themselves from a fatal blow. Until they soon wonder if they’ve been fighting for the same side all along.

As they begin to open their hearts, they up the stakes with a one-week pact. She shows him the power in breaking the law. He demonstrates the virtue of following it.

Then a far-reaching crime is suddenly exposed—that his family committed. And for one chance moment, Shay and Ben hold the key to right the wrong, correct the injustice. But at what cost?

Will they be able to return from the other side together? Or will their differences tear them apart?

Flirting with danger…has never been so tempting.

***LAWBREAKER is a standalone, full-length new adult romance told in dual POV. Due to mature themes and adult language, this book is for those 18 and older.*** 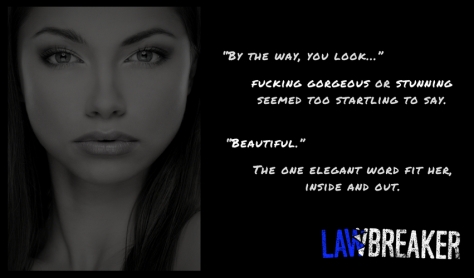 From Ben’s point of view…

The rumble of the idling V8 engine vibrated through the truck.

Faint gasoline fumes wafted in through the cranked-down windows, then blew out just as fast on the crosswind.

But none of those distractions fazed Shay.

Her attention had fixed solely on me. “Why do you like me?”

She didn’t say anything to my clarification. Instead, those expressive green eyes searched mine. Her chest rose with a measured inhale, fell on a slower exhale.

Her slender brows twitched down for a split second. “But why?”

A million reasons came to mind.

But in that moment, one echoed with more force than the rest.

“You live loud…without saying a word. When you’re around, you drown out all the noise. When I’m with you, there is nothing else.”

We sat on opposite sides. Lap belts held us securely down.

But she flattened her small hand over the worn leather of the bench seat, into the space between us.

I bridged the remaining gap, spread my fingers wide, until my larger pinky touched hers, knuckle to tip.

But we didn’t move away from our fragile connection.

We stared at each other…and saw through every defense we’d built. As we inhaled and exhaled, breaths coming faster, shallower, I got the sense that we breathed common air for the very first time.

We’d come from different worlds, but we occupied the same space in that moment. In spite of our differences. Maybe because of them.

But on her next quick breath, her brow furrowed. Her hand twitched away.

Whatever she struggled with had broken through. That spiky armor clamped back around her.

And yet, she still stared at me. Gaze fierce. Jaw set. “When I’m with you, I become someone else. I forget who I am. And I can’t let that happen. You make me believe I can trust again. And that terrifies me.”

I stared back at her, undaunted. “I will never let you forget who you are. Become someone else with me, someone better. Get terrified; we’ll only grow stronger.”

After a long beat, she sucked in a deep breath. Then she pursed her lips and blew it out, nice and slow.

She remained silent. Committed to nothing.

But then I felt her pinky press against mine. Tentative, at first. Then firmer, solid.

She’d spoken, in her own way. And I’d heard loud and clear: I’ll become someone better, I’ll get terrified…just as long as you don’t let me down.

I gusted out a relieved sigh. “Well, hell. No pressure there.”

She didn’t laugh. Her eyes narrowed.

I reached farther and slid my hand over hers. “I won’t let you down.”

Nothing in the world could make me blow this…even though the weight of our world rested on my shoulders.

Including lightening the mood. Now. Before she changes her mind and bolts from your truck.

Have You Joined Our Email Notification List?
Keep informed of new releases by signing up:
Kat & Stone Bastion’s Email Subscription

One lucky subscriber wins an eBook of their choice from our backlist AND a $10 Amazon or B&N Gift Card with each announcement.

Follow Us on BookBub for Future Sales and Releases

Thank you for your support of Lawbreaker. Enjoy Ben and Shay’s romantic adventure!